Broad nose, saddle nose and parrot beak nose are common nasal deformities.
Most people are not happy with the shape of the nose.
Over 10% of the population has some degree of nasal deformity. structural nasal deformity also leads to functional compromise. Snoring is a result of a deviated nasal septum. A constricted nasal canal arising from flat nose deformity can compromise breathing function. Daytime sleepiness is a result of such a functional compromise. Rhinoplasty provides not only good cosmetic results but also improves nasal function. It has proven that good sleep oxygen levels are very important for good memory functions.

Skill sets for a rhinoplasty surgeon:

Nasal tissues are very vascular and delicate. It consists of both bone and cartilage. A good rhinoplasty surgeon also needs to be an artistic person. Nose reshaping requires a lot of finesse. What might suit one individual might not be the right choice for another. An incisions made on the external nose are in the natural skin creases. These scars are well camouflaged with on the creases. Rhinoplasty surgery is performed under general anesthesia.


Correction of deformities arising from trauma: 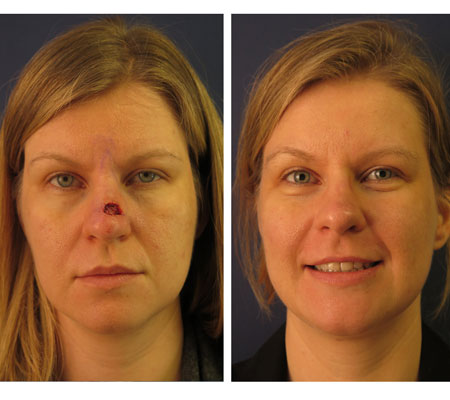